The Dinner of the Duke 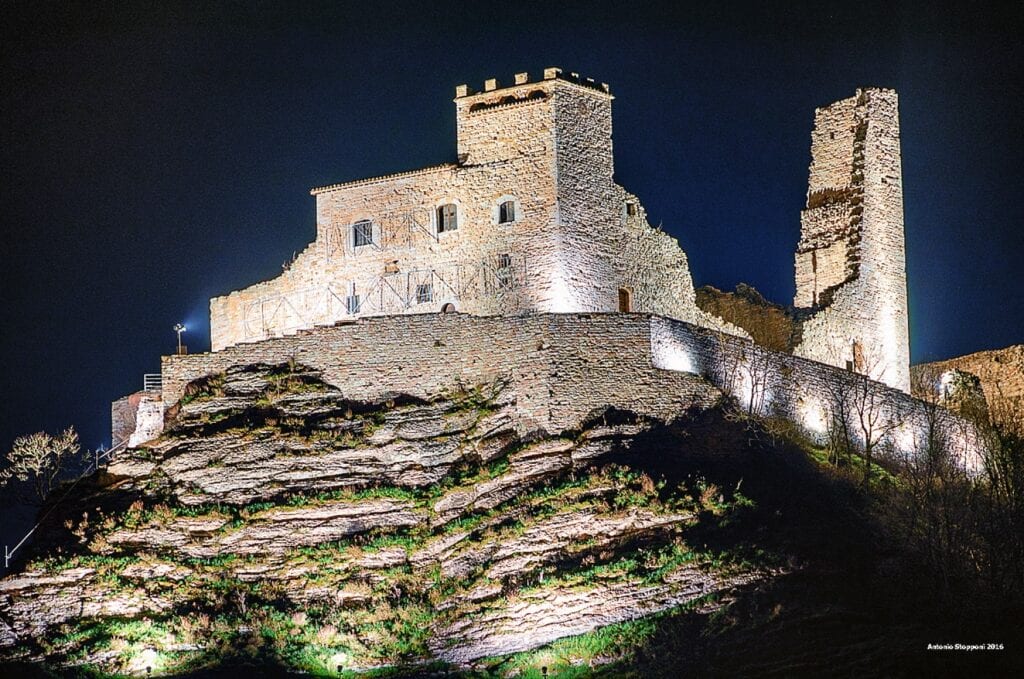 Duke Giulio Cesare da Varano, lord of the Renaissance Duchy of Camerino, and his wife Giovanna Malatesta, in the Anno Domini 1494 invite you to the dinner that will take place at the castle in honor of the illustrious guest, the Duchess Isabella d'Este Gonzaga: delicacies , game, soups and…. an event that will concern the Duchess of Mantua and will involve those present in finding a solution.

An itinerary to discover the ducal city of CAMERINO, which for a long time in the past, especially in the Renaissance played an important role in the political and cultural history of central Italy, thanks above all to the Lordship of the Da Varano: the itinerary will lead you to the discovery of the places of Da Varano’s lordship both in the city, with a urban trekking through alleys and gardens, and in the surrounding areas , discovering the Rocks and Castles erected by the Duke as a bulwark for the defense of his territory, witnesses of his power and his splendor, to finish further, up to Pergola, where the Duke and his sons were trapped and killed by Cesare Borgia and to Urbino, the first Renaissance duchy of the Marches which also marks the end of the Camerte dukedom

Free arrival in Camerino on  early afternoon, meeting with the guide in the square in front of the Basilica of San Venanzio and begin of the guided sightseeing: a fascinating urban trekking through alleys and gardens to discover a city proud of its glorious Renaissance past and more noble and proud of its present time despite the wounds of the earthquake. At the end, free transfer to the hotel, a charming 4* Relais, check-in and welcome drink. Dinner and overnight.

Breakfast at hotel. Full day excursion with private guide and driver to discover the historic fortresses erected by the Family Da Varano as a bulwark for the defense of the duchy of Camerino First stop at the homonymous and historic Rocca Varano, origin of the Lordship of Camerino: erected at the beginning of the 12th century on the rocky spur among the Chienti valleys as the first fortified residence of the family;Then transfer to the Castle of Pievefavera: founded in roman time, it is located on a rocky spur oriented in a north-south direction and stretching over the Chienti valley. Transfer to Tolentino and visit of the Castello della Rancia: built as a granary (grancia from the French grange) of a pre-existing abbey Cistercian, the manor was then adapted and used  as a defense fortification. Free lunch.  In the afternoon the excursion goes on towards Castelraimondo, dominated by the Cassero built by Giovanni da Varano in 1382 as part of a large system of fortifications that included the walls of town and a high tower. Stop outside the Castle of Lanciano, built as part of the mighty defensive system of the 'Intagliata', which from the second 1300s controlled the borders of the domains of the Da Varano Family. The Castle was then gifted by Duke Giulio Cesare to his wife Giovanna Malatesta who transformed it into a Renaissance noble residence: the castle and the pleasant places around amazed Isabella d 'Este Gonzaga, notoriously haughty and a lover of beauty, visiting the da Varano in 1494. The excursion ends at Rocca d'Ajello. Return to the hotel in Camerino where you will immerse yourself in the atmosphere of a Renaissance dinner in the presence of the Duke Giulio Cesare varano, his wife Giovanna Malatesta and their guest Isabella D'Este Gonzaga, in a Renaissance dinner. Overnight

Breakfast at hotel. Full day guided excursion with private guide and driver to follow the traces of the last moments of life of the Duke Giulio Cesare da Varano up to Pergola, where he with his sons were trapped and killed by Cesare Borgia, and where now it’s possible to see the famous Bronzi di Cartoceto: a bronze sculptural complex of Roman period, unique in Italy! At the end transfer to Urbino, the first Renaissance duchy in the Marche, which also marks the end of the duchy of the lords of Camerino, as in Urbino we find the last descendant of the Da Varano, Giulia, married to Guidobaldo II della Rovere, duke of Urbino who kept the rights on the Duchy of Camerino. Urbino guided seightseeing: the ducal Palace, the National Gallery with reinessance masterpieces of Raffaello Sanzio, the House of Raffaello. At the end, return to Camerino, dinner and overnight at the hotel.

Breakfast and check-out in the hotel. End of services

Nr 2 standard dinners in the hotel

Screenplay created  for the actor performances

Transport by PRIVATE vehicle only for the group during the planned visits and excursions;

Meals and drinks with meals

Entrance fees to museums and places to visit