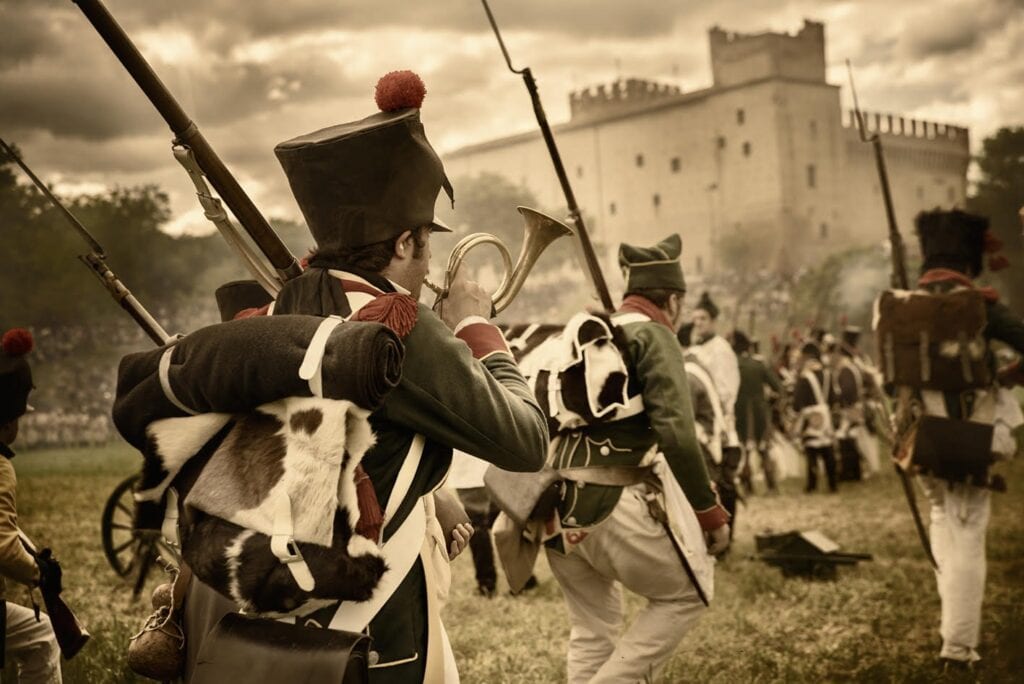 May 1815: a silent evening in a marvelous villa, broken only by the countess's quick steps: her husband, mayor of Macerata and noble landowner, Count Giuseppe Perozzi has been arrested by the Austrian troops after the defeat of Gioacchino Murat's army against the Austrians, despite the position and the noble class. Luckily he comes home and she can hug him again, he is alive and free. The noble couple are talking about what happened, when a noise is heard and suddenly a young man with a dagger and a bloody shirt appears in the living room: who is he? A thief? A killer? Or a deserter? A common bandit or a rebel? What will happen? Will the noble couple be murdered or will they survive?
Don't miss this 19th century mysterious dinner and you will find out the truth !!

We propose an itinerary in the places that experienced the spread of French Revolution  ideals, through the actions of the Bonapartists and the inhabitants who made those ideals their own, supporting and taking part firstable in the battle of Murat against the Austrians and then in the Carbonari uprisings and revolts that had place in the territory, also exploiting their position and notoriety to spread the ideas of freedom: from Tolentino (where the battle of Gioacchino Murat had place) to Treia (birthplace of a very famous player, who was even a member of Carboneria), Macerata (where the first revolt against austrian invaders broke out), Montelupone and Osimo(other places where the rebels had their secret meetings) we will introduce you to the locations and characters who more than others were witnesses and protagonists of the dawn of the italian indipendence wars called Risorgimento.

1° DAY                 MONTECASSIANO
Arrival in the afternoon on your own transport in Montecassiano. Welcome drink and check-in in the Hotel, an historical villa with a beautiful park and spa placed in surroundings of the town of Montecassiano (at 7km). Time at disposal. Free Dinner and overnight
2° DAY                 TOLENTINO / TREIA / MACERATA
Breakfast in the hotel. Entire day of guided excursion in the closer towns. First stop in TOLENTINO with the visit of the city centre and the Castello della Rancia, place of the battle in the 1815 between the armies of Gioacchino Murat and the Austrians, which is considered the first attempt at Italian independence. Then visit of TREIA: surrounded by a perfectly preserved medieval wall the town keeps the charm of its ancient origin. Treia has been even the birthplace of a very famous player of XIX century, Carlo Didimi (we can say the Cristiano Ronaldo of that period) who was member of Carboneria movement and used all his fame to keep in touche the regional groups of the same movement. Free lunch.In the afternoon transfer to MACERATA and guided seightseeing of this city, well known for its monuments above all the open theater Sferisterio and less known for historical events as the firts uprising against the papal and austrian government. Return to hotel. Dinner with actors performance. Overnight
3° DAY       MONTELUPONE/RECANATI/MONTECASSIANO
Breakfast at hotel. In the morning, transfer to MONTELUPONE and guided sightseeing: fortified medioeval village, even in Montelupone the army of Napoleon had thrown the seeds of personal and political freedom, so after the Restoration of 1815 Montelupone was the seat of one of the first outbreaks of the Carboneria, which gathered in the Emiliani Palace citizens of the Marche and Romagna organizing the first uprisings for the Italian Risorgimento. At the end guided sightseeing of RECANATI, the birthplace of the great poet Giacomo Leopardi and the opera singer Beniamino Gigli, celebrated in the places linked to their existence: the places of Leopardi poetry (Leopardi Palace, the Infinity hill) but also the Parisani theater and the adjoining museum dedicated to the singer, as well as the Pinacoteca with the beautiful works of Lorenzo Lotto. Free Lunch. In the afternoon transfer to the small village of MONTECASSIANO and sightseeing of its medioeval center. Return to hotel. Free dinner and overnight.
4° DAY       OSIMO
Breakfast in the hotel. Morning transfer to OSIMO and visit of the city: like many of the neighboring villages and towns, even Osimo had suffered the charm of Napoleonic ideals, and many of the citizens, especially nobles and professionals, had embraced the cause, including Count Cesare Gallo, mayor of the city since 1811: it is not difficult to think how his residence Palazzo Gallo could be a place for meetings and dissemination of Enlightenment ideas, also favored by the presence under the Palace of a network of tunnels and caves, today known as the Caves of Piazza Dante, which could offer the Carbonari the opportunity to meet, discuss their projects and carry out initiatic-type rituals, away from prying eyes. Guided sightseeing of Osimo: the caves, the square and its monuments, the churches with the Cathedral. Return to the hotel and check-out. End of services

1 half day of private guided seightseeing

1 dinner in the villa with performance of actors

The transport to reach the destination

Meals and beverages not declared