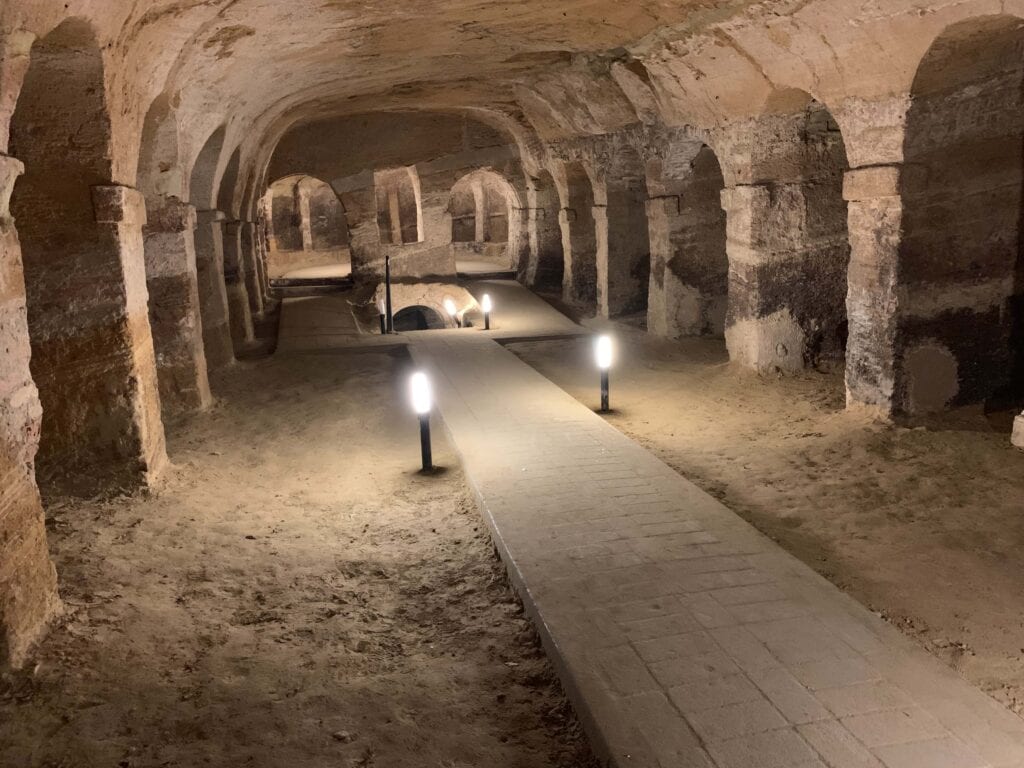 Tunnels of caves, located under the cities, dark places, anters, the ideal places to hide and wait for the victim to be plundered: the Marches were also this, the scene of a phenomenon that from 1500 onwards but above all in the 18th and 19th centuries engaged the religious and secular governments of those centuries, the Brigandage.

We propose an itinerary across the territories of Macerata, Ancona and Pesaro, to discover particular places linked to the actions of the brigands of the past centuries: from the underground caves of Osimo and Camerano which could certainly be excellent hiding places, to the city of Castelfidardo wherehad place the trial to one of the most numerous bands in the Region, to the villages in the hinterland of Macerata , places of birth and action of one of the most idealized brigands, Bellente, and theaters of various legends, up to the gorges carved into the rocks of the Furlo Pass and to the noble Urbino , which everyone knows as the cradle of the Renaissance but also home to one of the most important bands in the area, a sign that even art and culture did not always drive away hunger and violence. An unusual route, in tourist locations already known but certainly not from this point of view

1° DAY       MONTECASSIANO
Arrival in the afternoon on your own transport in Montecassiano. Welcome drink and check-in in the Hotel, an historical villa with a beautiful park and spa placed in surroundings of the town of Montecassiano (at 7km). Time at disposal. Free Dinner and overnight
2° DAY       CAMERANO / OSIMO / CASTELFIDARDO
Breakfast in the hotel. Transfer to CAMERANO, known as "the Underground City": below the city streets runs an underground path of tunnels and caves, a set of spaces connected to each other by a network of tunnels dug into the sandstone. Transfer to OSIMO and sightseeing of the city and its buildings, included the Town Hall with the famous headless sculptures, and the Caves, a dense network of tunnels, passages and underground rooms dug at several levels. Free lunch. In the afternoon, transfer to CASTELFIDARDO, one of the main world centers of accordion manufacturing, to which the International Accordion Museum located in the basement of the Town Hall. Sightseeing ot the city. Return to the hotel, free dinner and overnight
3° DAY       CINGOLI / TREIA / TOLENTINO
Breakfast in the hotel. Entire day of excursion in the footsteps of the brigands who populated the Chienti valley: first stop at APPIGNANO, a small village where Pietro Masi called Bellente was born, a young brigand, considered often a romantic hero, tender and ruthless at the same time, generous and therefore loved by the people. Transfer to CINGOLI, called "Balcony of the Marches" for the panoramic position on the Marche region, and guided sightseeing of the town. Free lunch. Afternoon transfer to TREIA, a Roman colony, dominated by the Piazza della Repubblica. The footsteps of Bellente lead then in TOLENTINO with a short sightseeing to the historic city centre that ends at Castello della Rancia: built as a granary (grancia from the French grange) was used then both as a defense fortification and as a stately home. According to local tradition, the Castello della Rancia is linked to the story and the end of two local brigands, two diabolic lovers, who usually attacked their victims in these places, and at the Castle found their death by the hands of their own victims. Return to the hotel, free dinner and overnight.
4° DAY       URBINO / ACQUALAGNA / GOLA DEL FURLO
Breakfast at hotel. Morning transfer to URBINO, UNESCO Heritage Site, and birthdayplace of the famous painter Raphael and guided sightseeing. Even Urbino with all its beauty was the scene of the exploits of one of the most famous bands of brigands in the Marche, the Banda Grossi and from Urbino the excursion goes on following the traces left by Grossi and his band in the neighboring territories: ACQUALAGNA , defined at national level, the Capital of the Truffle, given its importance recognized throughout the year for the various dedicated events. Truffle-based lunch / tasting. In the afternoon walk in the GOLA DEL FURLO, a Nature Reserve on the Via Flaminia with a suggestive, picturesque and wild landscape, often the favorite hiding place of the brigands who plundered the area up to the Unification of Italy. At the end, return to the hotel. Free dinner and overnight.
5° DAY       FRASASSI CAVES
Breakfast and check out in the hotel. In the morning, transfer with private driver to the FRASASSI CAVES, a majestic and imposing complex of karst caves, discovered by some speleologists in 1971, a spectacle of nature that has created unique scenarios thanks to the work of water and rock started about 190 million years ago: guided visit of the caves (about 75 minutes). Return to the hotel. End of services.

1 half day of shared guided seightseeing

Performances of actors during the visits

Screenplay created  for the actors performances

Transport to reach the destination